As you may have noticed, I’ve been 3d printing a lot!

Moving up to the gearbox motors for my quadruped has only made that problem worse, as all the parts are a bit bigger and heavier.  My first Prusa MK3S has been printing almost non-stop since I got it, so I figured it was time to increase my bandwidth more permanently.  Thus, a second MK3S!

This one I got from a kit so that I wouldn’t pay the 4 week lead time penalty of getting it pre-assembled.  I would have certainly preferred that, but I’m not sure I’ll be available to receive a shipment in 4 weeks, and I also could use the extra print bandwidth now.  Assembly was largely a breeze, although as predicted it did take a good 6 hours or so in total.

In any event, it looks like it is going strong right out of the box:

With my efforts to build a gearbox transmission and subsequent plans for a quadruped, there are a lot of parts which just can’t be made effectively from 3d printed plastic.  To date, I’ve sent out a few parts of the gearbox to CNC shops, which while effective, has a relatively slow turn around.  The best you can get without paying an arm and a leg is something like a week turnaround.  One thing I’ve learned from having a 3d printer on site is how transformative it is to be able to have single day turnaround for parts.  Thus, I thought I would experiment with CNC machining on a small scale locally and recently acquired a PocketNC V2-50.

Since this is the V2-50 version, it has a 50,000 rpm spindle, theoretically giving it at least passable material removal rates in aluminum.  Most of my gearbox parts look like they could be machined in an hour or so.

To date, all I’ve done is machine half of a sun gear holder out of the wax stock that ships with the mill.   I took it plenty slow and consider it a success that I managed not to break anything on the first try.

The result is approximately a thousandth off from what I was aiming for on the two critical dimensions I tested, although that probably doesn’t mean much since it was just wax.  It remains to be seen what I can achieve in aluminum.

Now I actually need to get the tools and fixturing that will let me machine the other half.

While designing the improved actuators for SMMB I’ve given Shapeways a lot of business.  I can definitely recommend it, their selective laser sintering (SLS) parts are easy to order, their website gives plenty of control, and you can expedite things to your hearts content.

That said, with the amount of 3d printing I am doing, I could have already paid for a fused deposition modeling printer several times over.  Thus, I recently acquired a Prusa i3 MK3S.  It certainly can’t print everything that you can do with an SLS process, but with slightly tweaks to the models it can do a lot of it.  The biggest upsides of course are the lower per-part costs… something like 20-100x cheaper, and the faster turnaround time.  Nearly anything I care about I can have a draft of overnight. 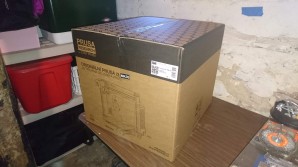 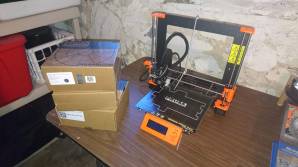 My first impressions are very positive.  After printing the test PRUSA panel, I CADed up two more quick name panels that printed flawlessly.  A simple flexi-dragon (thanks TheBeyonder!) also came out perfect on the first try.  It really is as easy as flexing the print sheet, popping off the part, wiping it down with IPA and kicking off another print. 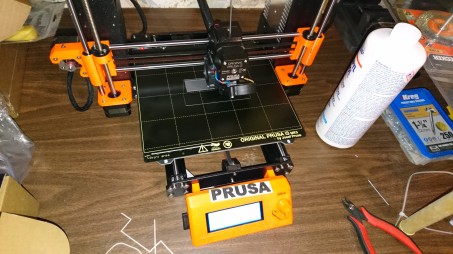 Next up is switching from PLA to PETG and trying to get the mech chassis designed and printed.