This is the newest version of a quasi-direct-drive servo from mjbots. It has a sleek new look, and improved performance all around:

Additionally, the M3 mounting holes are now 3mm deep instead of the previous 2mm, which gives more flexibility when designing mounts.

It is in stock at mjbots.com now, with more production becoming available in the next weeks and months.

Developing the moteus brushless servo controller has been a very long journey, and while it isn’t over yet I have a reached a significant milestone.  The first batch of production moteus controllers are now available for general purchase at mjbots.com and shipment worldwide for $119 USD each! 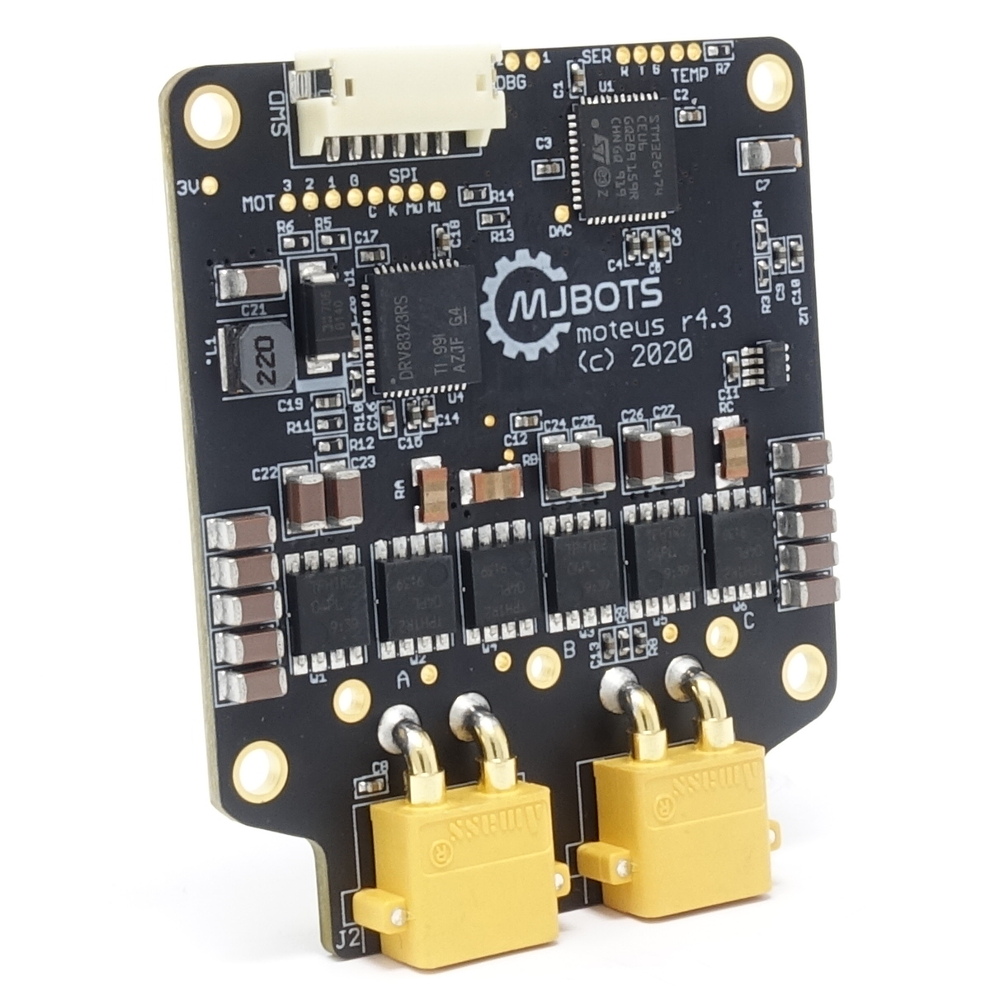 I’ll repeat some of the specifications here:

Simultaneously, I’ve got development kits available that give you everything you need to start developing software for the moteus controller out of the box: moteus r4.3 developer kit 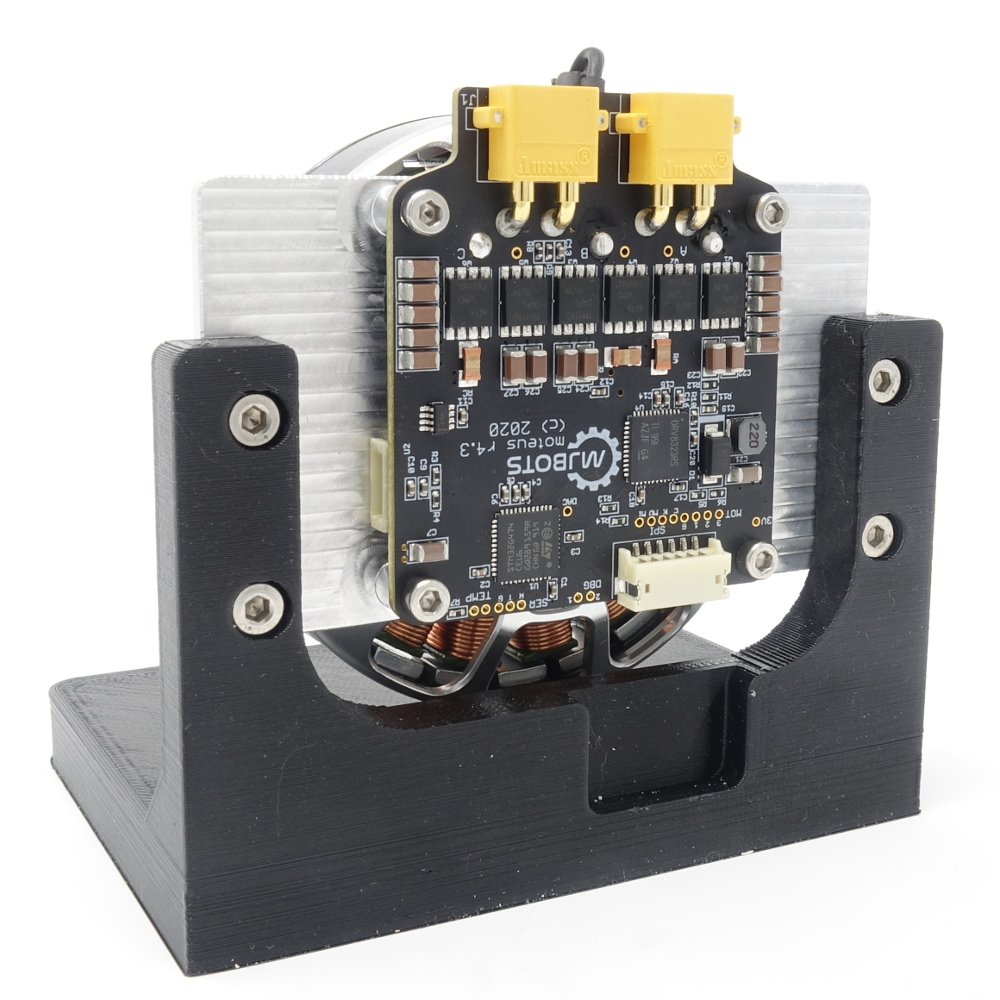 Many thanks for all the feedback from the beta testers who have been experimenting with the r4.2 version!

First, a limited number of qdd100 servos are available for sale to beta testers!  Check them out at mjbots.com.

After building up the first set of qdd100 servos, I wanted to empirically measure their performance parameters.  Some astute commenters uncovered in my terrible juggling video, that I didn’t actually have any ground truth measure of torque with these actuators.  Given that the ultimate torque is a pretty useful performance metric, it’s a good thing to have a solid understanding of.

To measure this, I built a simple test fixture (which is also the qdd100 beta development kit), consisting of two brackets.  The first lets the servo be bolted to a table, and the second mounts to the output and has set screws to hold a 1″ diameter pipe.  I used this to insert a 1 meter pipe which then can press against a digital scale.

Then I created a simple C++ application which emitted torque commands in response to joystick input and reported back telemetry from the servo: qdd100_test

Using these I was able to generate a plot of actual torque vs motor phase current: 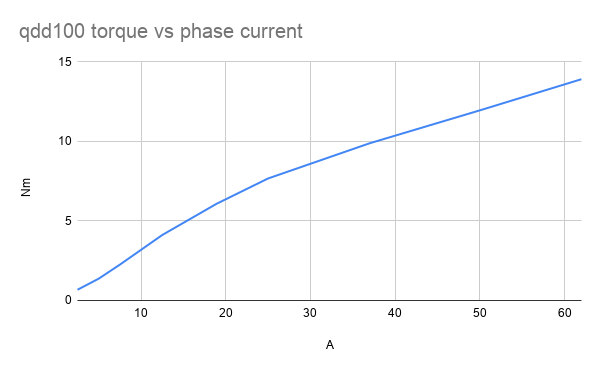 There are a couple of interesting things here, one is that the torque constant at low phase currents is slightly lower than I had estimated based on the motor’s Kv rating.  Second, the torque constant drops off faster at higher currents than I had anticipated, and third, the motor Kv rating was lower than I had predicted.  Those things combined result in a peak torque of between 12.5 and 15Nm depending upon the servo.  That’s still enough torque to do some serious jumping, but exploring those discrepancies is now on my backlog.

Here’s a video showing how this testing (and max speed testing) was done:

Now that I have a bunch of the mk2 servos set and ready to go, a new leg design, a new power distribution board to power them, and a raspberry pi3 hat to communicate with them, I built a new quadruped!  I’m calling this the mjbots quad A1, since basically everything is upgraded.

After I initially assembled the new legs onto the chassis, I realized I had the geometry slightly off and there was some interference through part of the shoulder rotation.  I made up new printed parts and replaced everything in front of the camera.  Thus, watch some high speed robot surgery:

The quad A1’s first job is to validate the new moteus controller in the quadrupedal configuration, after which I’ll use it as the primary development platform to get all my gait work done.

To build a second demonstration quadruped and to generate some development kits, I’ve built up a set of 20 of the mk2 servo.  The production process is working out fairly well, in fact slightly better than I had predicted for overall cycle time.  The servos so far are coming out great, moving smoothly with full power.

Now I need to test these on a quadruped!

I’m planning on building up a set of mk2 servos to test them on a quadruped and make some development kits.  As of now, I’ve got all the materials in house for the build and many things partially assembled!

Because my working environment is otherwise too idyllic and peaceful, I’ve been running the new moteus servo mk2 through its paces.  All day long.  8 hours a day.

This is the same test I ran to verify the controller, only now I’ve done it several times longer to get a better feel for if there are any weak links.  Somewhat surprisingly, the ball doesn’t drop all that often, only once an hour or two.

Earlier I described my design plan for reducing the overall mass of the moteus servo mk2.  Constructing a prototype of this turned out to take many more iterations and time than I had expected!  Along the way I produced and scrapped two front housings, two outer housings and a back housing.

I made one complete prototype which only had the weight reduction applied to some of the parts and lacked a back cover and any provision for a wire cover.  It was the one from the moteus controller r4.1 juggling video: 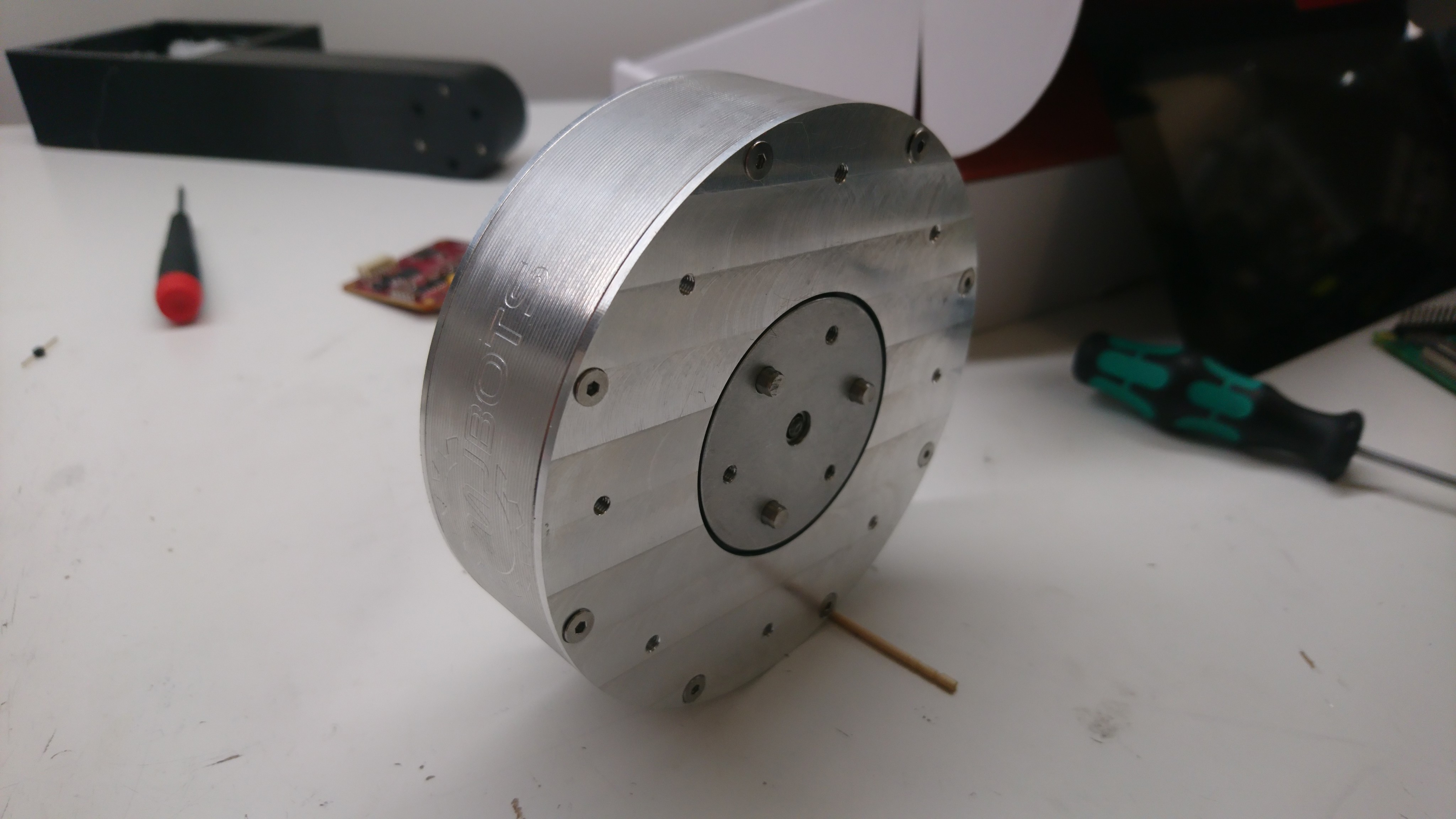 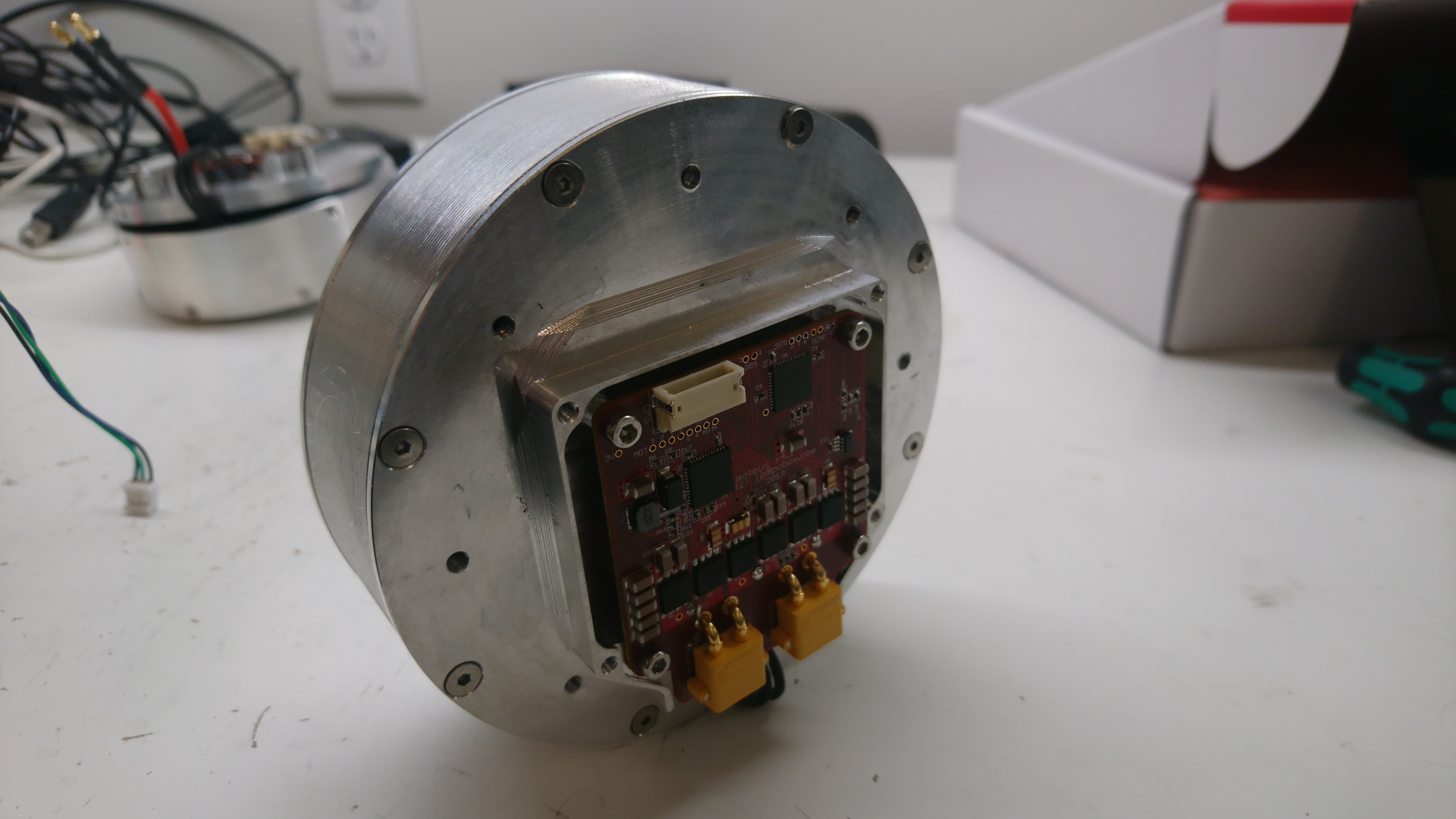 Because of the multiple tries on the large-for-me front and back housing, I had to make soft-jaws and prepare stock in a more efficient manner.

I also had to get new workholding solutions for the PocketNC in the form of the wcubed vise.

Every one of the pieces got reworked in some manner or designed from scratch for the things that did not exist previously.

Front housing: Here I iterated on how much material to remove from the central cavity.  Initially I removed more, but it gave the primary output bearing problems to be loaded intermittently.  Also, I had adhesion problems with the ring gear when too little material was left there.  I settled on a continuous ring for the output bearing and a decent amount of material for the internal gear. 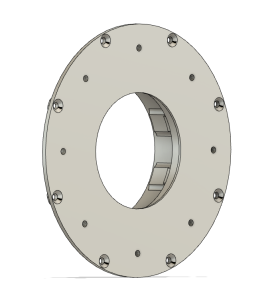 Back housing: I tweaked the back housing mounting points so that the outer housing could be symmetric.  Also, I added a facility for the wire cover to guard the phase wires entering the controller.

Outer housing: The outer housing was largely unchanged from my initial weight reduced design, although I produced one bad one due to a simple mistake locating the mounting hole, and a second because the stud lengths between the front and back were different in an earlier iteration.

Planet output: The planet output design changed only to add some weight reducing cutouts.  This was the last part for which I was still using mk1 servo spare parts for, so now I actually manufactured a prototype in house.

Planet input: Here there are now weight reducing cutouts, and the mating studs use less material. 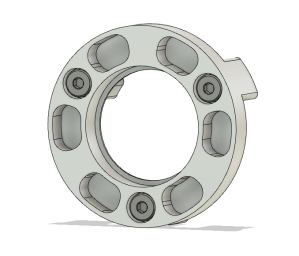 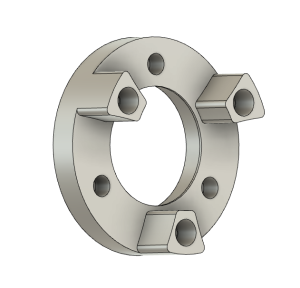 Back cover: The back cover design is basically unchanged, I just had to make one for the first time. 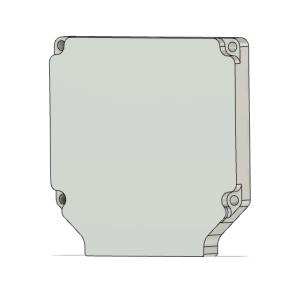 Wire cover: The wire cover is a part of the design I had deferred until now.  It bolts to the back housing and shrouds the phase wires. 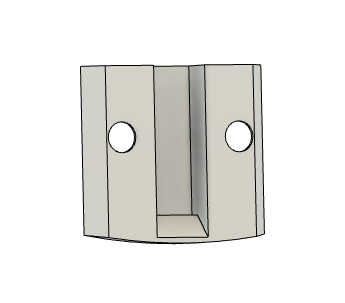 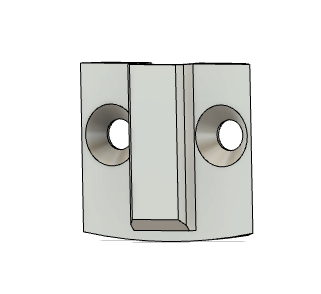 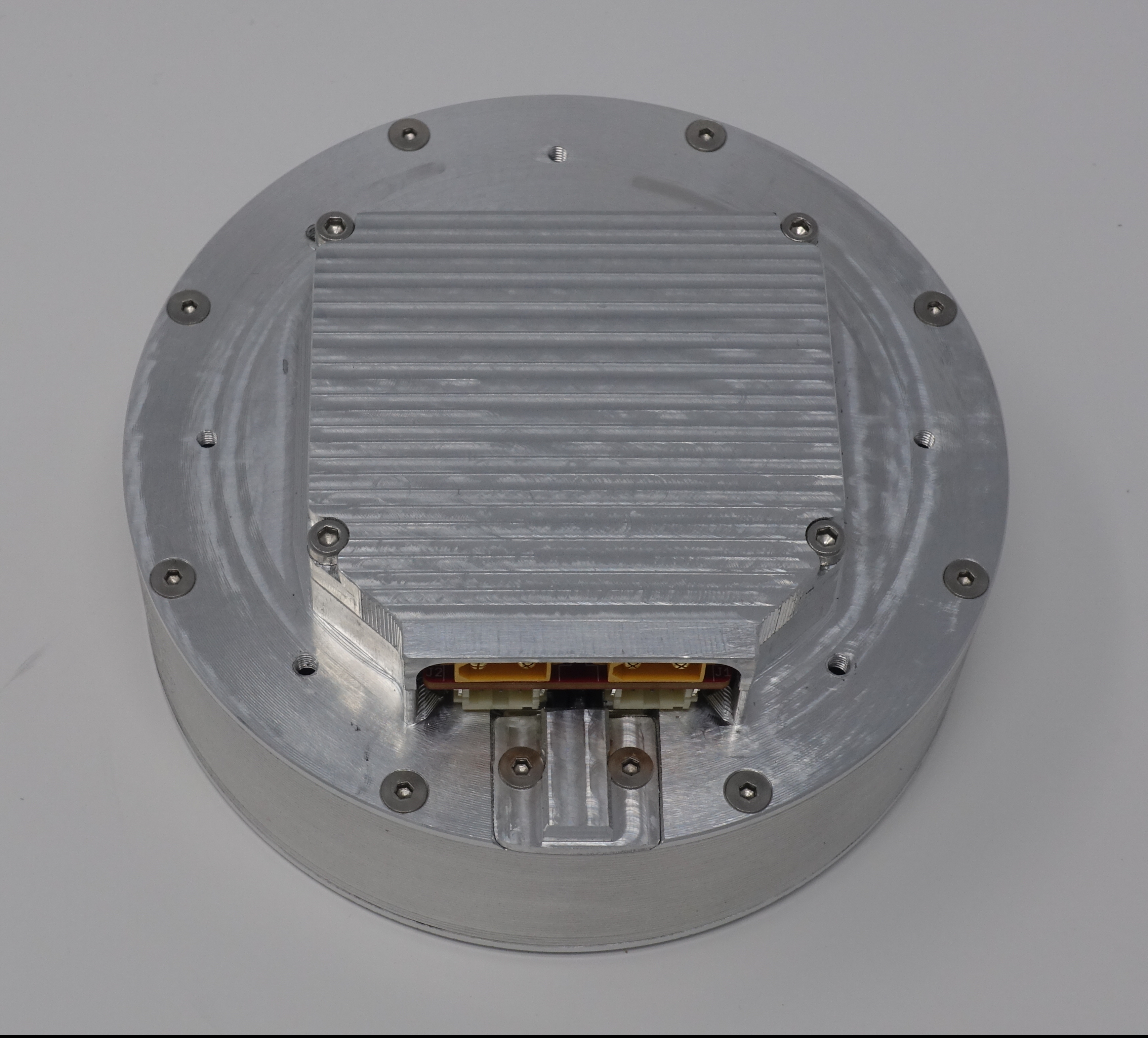 I’ve now received all the supplies I need to make up development kits for the moteus controller and to make a test quadruped!

I’m planning on making a few development kits from this production run so others can experiment with the moteus brushless controllers.  Some people have already expressed interest in getting one — you have hopefully been contacted earlier.  If you are interested in getting an opportunity to buy an early access kit and haven’t heard from me yet, fill out this form!

I expect the development kits to clock in at $199, and include everything you need to power and communicate with the moteus controller, as well as a brushless motor to test with.

While gearing up to make some dev-kits followed by a pre-production run of the moteus servo mk2, I recently received a bunch of frameless rotors and stators.

As with the other custom items, I’ve got some spares of these for sale at shop.mjbots.com if you’re building along with me!  [UPDATE no longer!]