One of the areas of improvement we are working on for Savage Solder is velocity control. More specifically, we are improving the performance of the velocity controller at higher speeds and higher accelerations. In our runs during the spring of 2012, we had a simple PI controller on velocity let the car safely run around 5-7mph with accelerations around 0.7m/s^2. Given that the underlying platform can exceed speeds of 40mph and accelerations of 4m/s^2, we wanted to get a little closer to the theoretical maximum in order to reduce event times. Here, I’ll look at why the original controller was limited, and what properties we wanted an improved controller to have. 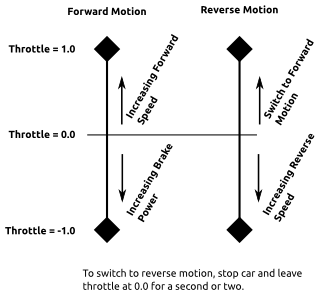 First, a little background. The motor controller on Savage Solder is the stock HPI Savage Flux controller, configured with a sensored brushless motor. For input, it uses a standard RC servo control pulse width signal from 1ms to 2ms in duration at 50Hz. We logically treat it as having a range of throttle command values of between -1.0 and 1.0. In forward motion, the default configuration has increasing positive values used to increase speed, and increasing negative values to apply braking forces. It can also move in reverse, but requires a small lockout window of stopped time, and in reverse, no braking is possible. Forward commands always result in attempting to move the wheels forward regardless of the current directin of motion. You can configure different behaviors, but these are the factory default and most of the alternatives involve removing reverse capability entirely, which we require. When driven manually, the throttle is very sensitive. Given the car’s very fast top speed, it takes very little movement on the throttle trigger to accelerate the car up to speeds that would require a wide open tarmac to navigate safely. Similarly, it takes some skill to not flip the car over end over end during both acceleration and deceleration. The figure at the right gives a simple representation of these properties. Note that the magnitude of the increasing speed and brake power is not specified and in fact the region near 0 throttle is also undefined.

The legacy velocity controller for Savage Solder was a simple PI controller, with a small state machine surrounding it to reset it and wait the required time upon switching from forward to reverse motion. In this formulation of a PI controller, the integrative term “finds” the appropriate throttle over time, while the proportional term improves the dynamic response by applying extra throttle based on the instantaneous error. Given a long time, and a constant speed command, this controller had no problem converging on that speed with precision. The plot below shows some data from the spring where the car accelerates up to 8 mph. You can see that the actual speed converges on 8mph in a second or so. 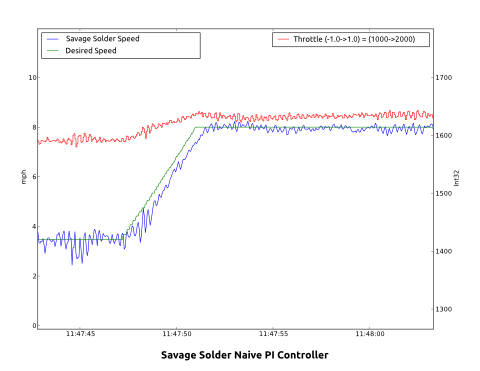 The problems with this solution became more apparent at higher accelerations. Since the integrative term requires error in order to equalize, the higher the acceleration, the larger the steady state error during the acceleration. This isn’t often much of a problem during cases of speeding up, but when slowing down it can be a big deal. Our approach for the Robo-Magellan competition (and most other entrants), involved bumping the target traffic cones at low speed. If the speed controller lags in deceleration by several seconds, the car would just plow over the cone rather than stop in front of it. The other major problem is during the transition from a regime of constant acceleration to one of constant speed, especially when slowing down. The integrative term can take a long time to wind back down, during which time the car is completely stopped. In the 2012 Robomagellan event, this was magnified by transitioning from pavement to tall grass right near the end of the deceleration into the first bonus cone. Finally, to mitigate these problems somewhat, we set the P gain to be larger than would otherwise be desirable. The result of this higher gain in the plot above can be seen as small oscillations in the speed and commanded throttle.

When designing an improved solution, we considered the two primary event types that we were planning to compete in:

Next time I’ll look at the experimental path we took, and the next iteration of the velocity controller which we used to improve the performance.