The full quadruped robot needs to both distribute power from the primary battery and RS485 serial network to all 12 servos.  To make the wiring of that easier, I’ve made up a junction board to provide power connectors, distribute the data network, and act as the IMU for when that is necessary. 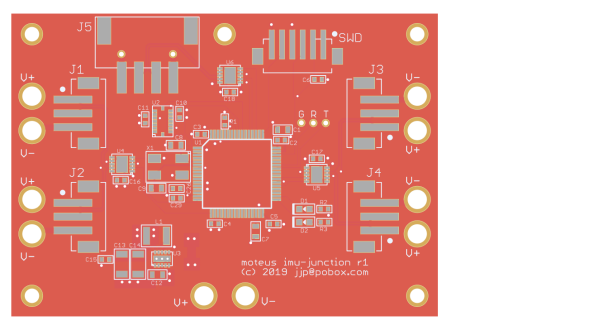 The RS485 network is bridged between two halves of the robot.  One connection comes in from the controlling PC and two separate links go out, one for the left side and one for the right side.  This could eventually allow the controller on the junction board to take intelligent actions itself, such as querying the force applied on all 12 servos.  It could then return the result in a single RS485 transaction to the host computer.  I am expecting that will be necessary to achieve closed loop control approaching 1kHz.

It also includes a Bosch MEMS IMU.  The junction board will be rigidly mounted to the quadruped chassis, which means it is an ideal location for an attitude reference.  I haven’t integrated the IMU software from the gimbal yet, but have verified that the IMU is operational.

Finally, it has a 3.3V regulator on board to power all the logic level chips from the primary 18V supply.  I managed to toast two of these by not having sufficient input capacitance, and hot-plugging a lab supply to the power lead.  The inductive transient caused the regulators to over-voltage, resulting in a short from power to ground.  This is apparently a relatively common design mistake with this part according to TI’s E2E.  I attempted to rework replacement parts on the board, but due to a cascade of failures from USPS to my soldering, I gave up and just spun another revision.

In the meantime, I took one board and manually powered its 3.3v supply to bring up the firmware, and I’ve converted the other to a “dumb” mode, where it has no 3.3v supply and all the RS485 ports are just hard-wired together.  (Note the very tidy blue-wiring and hot glue.)

That should be enough to make progress with getting the full mech working, even if the control frequency is limited.